On October 3, 1967, anticipating union of the Evangelical United Brethren and the Methodist denominations the following spring, the Administrative Board of First Evangelical United Brethren Church voted to extend an invitation to Lowell Heights Methodist congregation to enter into union at the 114 N. Ironwood address.  The invitation was accepted by Lowell Heights on April 7, 1968 under the pastorate of the Rev. Harold R. Hotchkiss.

Union was declared in an impressive joint worship service in the present building on April 21, 1968, the date of the Uniting Conference in Dallas, Texas.  Both Rev. David Lynch, pastor of the First Evangelical United Brethren, and Rev. Harold Hotchkiss, pastor of Lowell Heights Methodist, continued with the merged congregation until Annual Conference at which time Rev. Hotchkiss moved and Rev. Lynch remained as pastor until the Conference of 1972.

The name "Evangel Heights" was taken from both church names - "Evangel" from first Evangelical United Brethren and "Heights" from Lowell Heights.  The selection was made from a list of 47 suggestions.  The committee for the selection of the new name was chosen by the church's lay leaders.  The new name "Evangel Heights" was used for the first time on Sunday, June 23, 1968.

In 1961 the Evangelical United Brethren congregation paid off the debt at 114 N. Ironwood, burned the mortgage and that same year broke ground to build the Education Wing.  After the merger and under the leadership of Rev. Robert Seitz, the debt on the Education Wing was paid off in March of 1975.  At that time there was a group of dedicated workers who made delicious homemade peanut brittle at holiday time.  They used their profits to help pay off the mortgage of the Education Wing of the building.

With a growing congregation our lower level, Albright Hall, was not large enough to hold church events, so around 1983 under the leadership of Rev. Michael Coyner, the church began to discuss the possibility of building a new Fellowship Hall.  On March 11, 1990, under the pastorate of Rev. David Byrum, we broke ground for the new Fellowship Hall.  It was consecrated on November 18, 1990.

Evangel Heights is constantly reaching out to the community.  Currently the Parents Day Off (PDO) school is housed in the Education Wing.

EHUMC Pastors Throughout the Years: 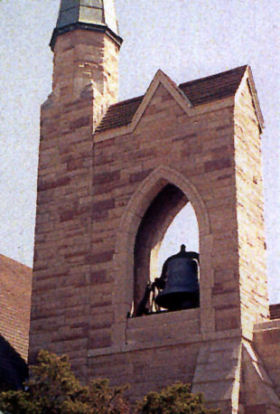 In 1878, a few years after the beginning of Evangel Height's history, a bell was purchased by the Sunday School class of the original church, then called Zion Church.  After several moves it now hangs in the tower at 114 N. Ironwood, home of Evangel Heights United Methodist Church.

The bell, which weights 1500 pounds, was purchased for $437.  It no longer rings freely but has an electronic clapper and sounds just as beautiful. 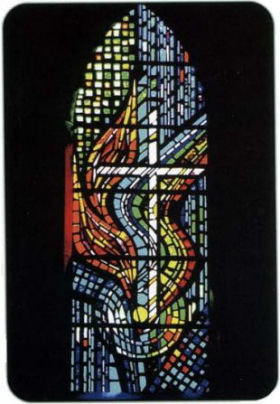 A brilliant Gothic panel is mounted on the lofted wall of the Fellowship Building.  It depicts a central source of creation and from which rises the Cross of Jesus Christ and the Flame of the Holy Spirit.  This symbol of modern day Methodism is an original design crafted by heavy glass set in solid mastic.  Light is enhanced by facets chipped into the glass, which the supplier imported from sources that date back to the Renaissance.

The Window was given as a memorial gift by the family of R. S. Cooke, an artist who would have appreciated the inspiration of this work.